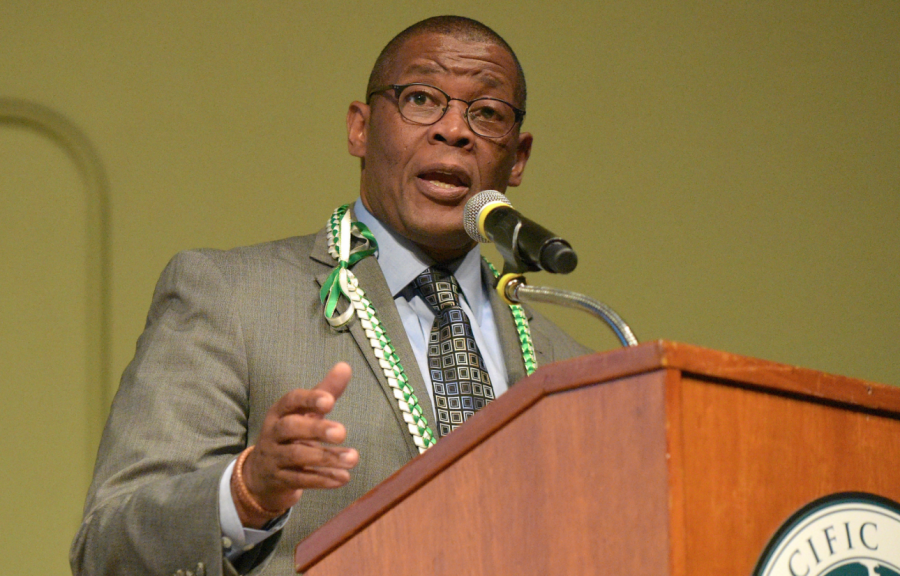 Dwayne "Dee" Priester speaks to 8th-grade graduates at a ceremony in 2019. Priester has taken on a new role this year of principal for grades 6-12. Photo contributed by Scot Allen, Associate Director of Communications for Mid-Pacific.

Last year Dwayne “Dee” Priester stood outside of his office greeting middle school students as they walked to the cafeteria for lunch. Now, Priester logs into Zoom classes for both middle and high school, popping in to say “hi.”

This is part of the school day for Mid-Pacific’s newest principal, who has expanded his role this year to take over administration of the high school. Due to economic changes, Mid-Pacific created a new position, principal for grades 6-12, President Paul Turnbull announced in June. Former principal Paul Passamonte decided to embark on another job, while Priester took on the 6-12 principal spot. Priester has been working at Mid Pacific for 12 years.

Prior to Mid-Pacific, Priester received his doctorate in education, worked as head of administration for K-12 at Hawaii Preparatory Academy in Waimea  and had experience with middle school through college students.

Na Pueo editors Kamm Kojima and Erin Goya sat down with Priester via Zoom and asked him about his plans for high school, virtual and in-school learning.

How has working with Mid-Pacific’s middle school helped as you start this new job, working with high schoolers?

The biggest help is having the opportunity to learn from the faculty — working with the middle school faculty helped me to become a much better principal. Learning from the students through what their needs are and really making some adjustments over the years. Also, getting a sense of the school community, having worked for so many schools, I can tell you that every school has a different personality. Being here all these years helped me get a sense of what Mid-Pacific’s personality is. That’s a range from the students all the way to the alumni.

What is one thing students don’t realize that you do as the high school principal?

We’re trying to make sure that instruction is continuing to happen and supporting the teachers with instruction by making sure that fundamental principles of what good teaching looks like still continues. The biggest thing is making sure that we are still connecting with the students. That’s a monumental task because we’re doing that via Zoom.

One of the messages that is probably the most important right now, is making sure that we’re building those relationships with you, the students. Without those meaningful relationships, teaching is just teaching. It’s those connections that we have to work extremely hard to maintain, but that’s worth it, just to go that extra mile so that you as a student know that we still care and connect you to other students too.

How are you getting to know and encouraging students to know who you are?

I’m intentionally blocking time out in my daily schedule, just to pop into classrooms. One of the things I try to do as a principal is intentionally not answer emails until the later part of the day, so I can be in the classrooms. Just so students get accused of seeing me around. I want them to have that feeling, that I’m always here.

What is one message that you want to give to the readers of Na Pueo?

Remember to look for the good in everyone, be a community and care.  There will be times where people might; say something or do something you don’t agree with, or they might look different than you, or they may dress in a different way than you. Understand, it’s that community, because we’re composed of different people, and different is okay.  Just offer a kind word, never be afraid to say hello or just to extend a hand, when someone needs it.  Live with integrity.  Care about the people around you, and I mean really go out of your way to show that you care.

My role as a principal is to serve my students, to serve my teachers, to serve the people in the community. You’re a principal who says hello to everyone, it’s important, if you see a piece of paper to pick it up or if someone is struggling to help them in their struggle because the higher you go the greater your responsibility is to serve and never forget where you come from. So, if I could offer that to any student, it’s to be a community member and being a community member means to do things that most people don’t think you should do.

Within this virtual environment, what is one word you want to give the readers?

Persevere and find ways to connect with your classmates.

I do believe that in the next three to four months, the next six months, we’re going to get past all of this. I’m hopeful, and I say that because I’m full of hope, I believe that this is going to end at some point.

In the meantime, try and build a sense of community, try and connect with one another, and don’t forget what makes Mid-Pacific so unique. Don’t forget that, and hold onto that as tight as you can. Just believe, just hope that things will get better. If we have that hope, then that’s the thing that will get us forward.