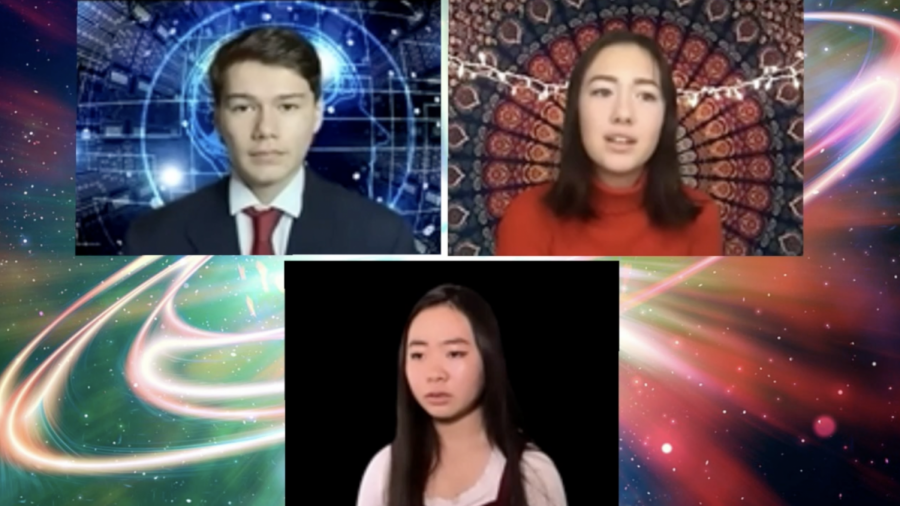 Viewers of this year’s fall play opened their iPads and clicked on a link, getting ready to cozy up and spend the next 90 minutes watching Goodnight Clara. A Mid-Pacific play created, rehearsed and filmed entirely online.

“We just knew we had a starting point and we wanted to make a devised theatre piece,” said advanced acting and IB theatre teacher Alexander Fox, who advised the creation of Goodnight Clara.

The play was devised into compositions for everyone to work on and each individual came up with ideas to complete their respective sections of the play.

The filming was shot in a unique way specifically for being online.

“I suggested a structure based on the movies Slacker and Waking Life by Richard Linklater. Basically it’s kind of a pass the baton structure. We thought that would be useful because we were creating scenes that were to be set in a zoom call, and ultimately we wanted a show with balanced performance opportunities for the cast,” said Fox.

Students said, filming on Zoom is particularly difficult, especially because the actors have to pay extra attention to the props, background noises and the possibility of a virtual background.

“When you see it, it’s just like one take. But when we film it, it is fourteen takes,” said senior Hitmoi Kidahashi. She played the role of Hui-Jing, who represented Clara’s knowledge.

Students said having the play online was an interesting learning experience. Kidahashi auditioned for the play specifically because she heard it would be online.

“I really like the idea of online because you can do a lot of things with the camera. I auditioned for the play because it’s about a scary story and it is online,” said Kidahashi.

Students said, Goodnight Clara is the story of a girl, Clara, who is having her final dream. But she doesn’t know it’s her last dream. Those who were able to see the play had the pleasure of experiencing the 16 personalities in Clara’s dream, who actually are Clara, navigating the play and urging Clara to realize she is no longer here.

“The main thing to memorize with this whole play was the bird story. At the very end of the play. . . it was talking about how realism is different in all ways. It could not just be your end, there could be more to life,” said sophomore Alaina Visi.
Visi played the role of the “true Clara” in the play. Visi also created the opening song and choreographed the dance to go along with it.

“I started off with a snippet of a song and he was like ‘turn that into something!’ With the help of Mr. Fox and the cutting of the music, cause it was a little rushed but, I think it turned out okay,” said Visi.

Goodnight Clara wasn’t the only thing that theatre had to switch online. Fox’s IB course still had to do their solo shows as well, Fox said.

The solo shows are an IB assessment called the Solo Theatre Piece (STP). They’re an assessment for students in the course to showcase the talents they’ve honed during the semester and present them to an audience and for the teachers to review, said Fox.

“What I do is give them the parameters of the assessment, and then help them understand their theory in practice. I then facilitate the execution of their production within the larger ensemble show,” said Fox. Fox said the solo shows also provide an opportunity for the students to research a specific figure in theatre history and base their show off of one of the techniques that figure created.

“Each one of the students has to pick a theatre theorist. This is an artistic innovator whose work is recognized as relevant to advancements in theatre history, performance, writing, or design. These are people who are sort of figure heads of a particular movement in theatre, something that moved theatre forward,” said Fox.

Middle school has also switched to virtual. Theatre teacher Colette Weil is advising Three Dots, an 8th and 9th grade play that was practiced and is to be recorded virtually. There is also still the spring musical to look out for.