New Normal: Students and faculty give insight about the COVID-19 environment at Mid-Pacific 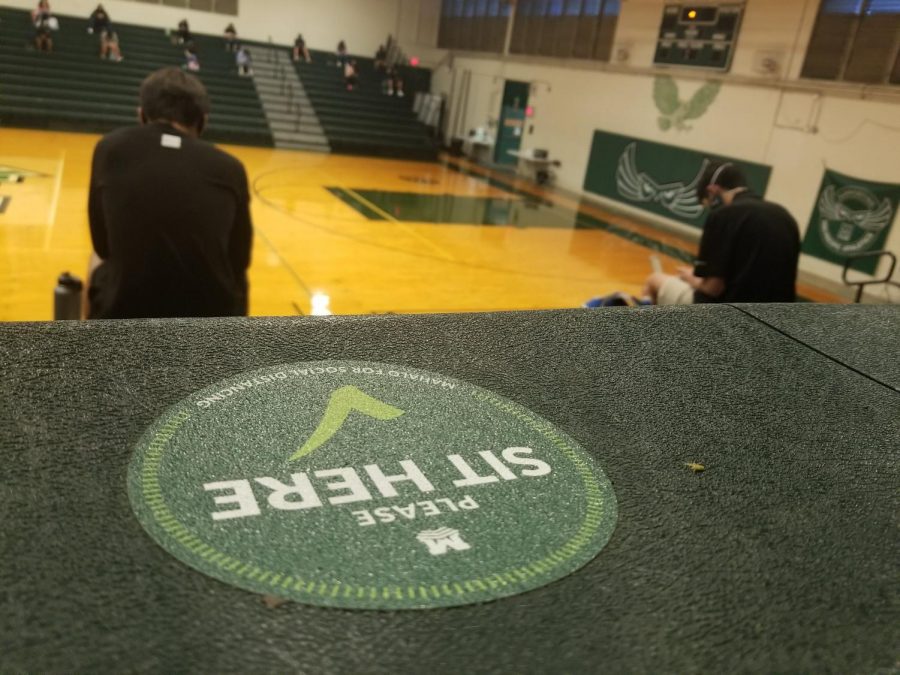 A socially distanced sticker lies in the gymnasium for students to sit and be safe. The Mid-Pacific community shared how they are coping in a CO- VID-19 school environment.

Barely 11 months ago, Mid-Pacific first closed its campus due to a deadly pandemic, and now students are living with a “new normal” at school that includes face masks and shields.

The number of students returning to campus increased by 10 percent from November to January, according to data from the school administration.

In the spring semester, 610 students, or 78 percent, of the high school population are now attending classes in person on campus, while 177 students, or 22 percent, are still learning via a Zoom classroom. During the first semester, 541, or 68 percent, of students returned to class.

Restrictions on campus have become a part of students’ everyday routine at school, which cuts off interaction with one another.

“Overall, I’ve gotten used to it and it shows how much we value each other as peers, definitely something before that we took for granted, being able to just interact freely,” said freshman Jackson Ibarra.

However, senior Deborah Chun said because of these rules, she thought school would be a place with very limited freedom. Chun is still learning from home.

“I didn’t think going back to school would’ve been fun because it sounded very strict with the restrictions with no freedom just like a prison,” said Chun.

Sophomore Kylie Cortez said when coming back to school, it took time to recognize students and faculty, especially with their masks.

“I feel like at first, it was super weird for everyone to have to get used to noticing people’s faces with a mask. It’s kind of part of our identity now since we recognize people from the eyes up,” said Cortez.

However, learning virtually is easier because of the accessibility of the classroom right from your screen, said junior Kescher Nakahara-Akita.

“I’m going to be honest, I think the one thing I like is not having to wake up much earlier because then you don’t have to worry about driving to school. Once the school day ends, it just ends and you don’t have to go back home and that’s much more convenient,” said Nakahara-Akita.

Students said they have found other ways to form connections with her classmates while keeping a safe distance from them.

“I feel like we learned to build socially-distanced energy connecting energies with different people is how I’ve personally connected with other students since that physical touch is gone,” she said.

One of the positive aspects of this school year has been the optimism of students despite the changes being imposed into an environment that they once knew very well, said Assistant Principal for Academic Affairs Christel McGuigan.

“I am so proud of the students because they are a part of that process of maintaining the safety procedures but also part of the process of taking that leap of faith that we’re going to do this well and that it’s going to be okay,” said McGuigan.

Teachers have maintained a positive attitude and effort to maintain curriculum with both in-person and virtual students in their classes, Ibarra said.

“It’s kind of hard having students at home and also students in-person so I think they’ve been doing a good job with trying to balance both and make sure both groups of people are getting the resources they need,” said Ibarra.

Along the way, students have faced their own challenges that came along with attending school in a COVID-19 reality and have learned to overcome them.

In a virtual environment, communicating is a key aspect because of getting kicked out of classes many times before, said Nakahara-Akita

“I’ve learned that communication is very important whether it be connecting with your teacher or the dean. When you communicate and help me know what’s going on, it helps them so that there’s not miscommunication, which has happened with other classes before,” he said.

High School Principal Dwayne Priester said his struggle has been coping alongside the seniors and their losses of traditions from the pandemic.

“Knowing that this is their last year, a lot of things that are associated with senior year has been taken away from my seniors and that, to me, is hard. I want seniors to walk away with those experiences, and I feel like COVID-19 has stolen that,” said Priester.

Many seniors said they are disappointed with how the year has unfolded for them and are trying to stay hopeful with the time they have left in high school.

“It’s been a really sad year overall, which I know that’s not what our teachers and advisors want to hear, but it’s a million times the truth,” said Chun.

Nonetheless, Cortez said having the right mindset before school starts helps to cope with the circumstances that are with students.

“School is where I’m there to learn and that’s the space that I created for myself to make sure that I’m in a good head space for academics,” said Cortez.

Many members of the Mid-Pacific community are impressed with how adaptable students have become to their new environment but are not surprised.

“I’ve always known that our students are super talented so we just get to see it in many different ways that we never have before,” said McGuigan.

Some students said they were able to gain a certain skill that they never would have anticipated if COVID-19 never happened.

“I definitely think virtual learning forces me to take better notes, faster notes, and more efficient ones because some teachers go fast and some go slow,” said Nakahara-Akita.

Priester said he hopes the outcome of this school year will be for everyone at Mid-Pacific to know that they’ve come a long way because of the conquering over this year’s challenges.

“I hope they can look back on these experiences and understand that no matter what, they survived and overcame and can walk away with that sense of ‘this is what life threw at me and I overcame this, so whatever’s next, I’m ready to take that on too’,” said Priester.

Looking into the future of next school year, there are a few predictions that are already in place and are a possible addition to school life at Mid-Pacific.

Students’ daily schedules could be minorly altered next year but with no big changes in mind, said McGuigan.

“We’re not looking to make major changes to the schedule because we don’t want to create yet another thing that everyone has to learn, but there might be some tweaks here and there to the daily schedule,” she said.

Priester said he predicts that the coming year will bring similar conditions as this school year, including the hybrid option for students.

“My sense is that we’ll open the year, at least in the first semester, in a COVID-19 environment. I think we’ll have a hybrid environment, but it’ll be a little different than it is this year in terms of who’s allowed to be hybrid and some other tighter parameters,” said Priester.

Empathy has developed throughout this experience in a way that people have found the bigger value in one another, said Ibarra.

“I think the pandemic has helped people understand other students’ situations and being able to relate to that helps us move together as one community,” he said.