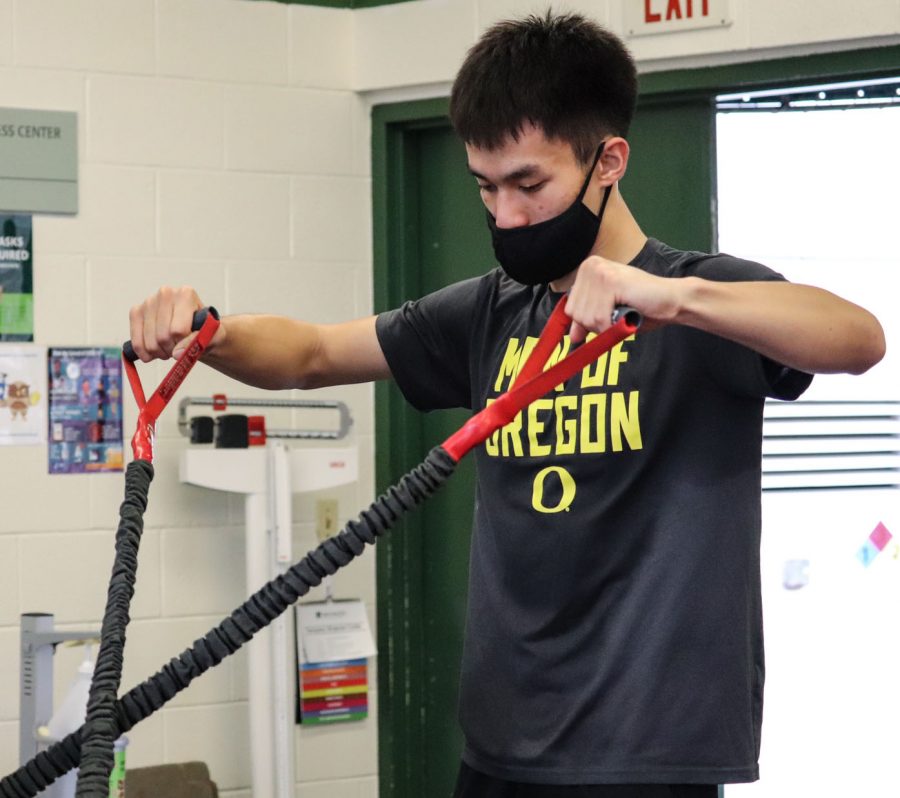 Senior Jordan Lee sweats as he works out in the weight room.

On a normal year, elementary school students sit watching senior games, gleefully cheering “Go Owls, Go! ” Mid-Pacific fans watch on, ready to see seniors play their last high school competition. However, this pivotal high school moment disappeared this year for many ILH winter sports.
On Dec. 28, the Mid-Pacific athletic department announced that the Interscholastic League of Honolulu (ILH) has cancelled games for: basketball, bowling, wrestling and paddling for the upcoming season one (Jan.- March).
Paddling and bowling have also not held any practices, as these sports are off campus.
With no practices, players said they are able to focus on other aspects of life.
“I have a lot more time to do my homework; I noticed that I’ve been staying on top of things and I don’t put it off after practice or I’ll do it the morning of because I’m too tired after practice,” said Jill Morimoto, senior paddler.
Bethan Nakano, junior paddler, said she was going to have to quit her job at MJ Cafe when paddling was in season.
“Now I can still focus on my job and on school,” said Nakano.
Players said they were optimistic about having a season when they had to decide to attend in person or virtual school.
“I went back to school partly for the reason, if we did have a season, so I would be able to go to practices,” said Nakano.
Other players said they felt disappointed when they heard games won’t be played. Jordan Lee, senior basketball player, said this year could be his and other players last time playing organized basketball.
“A lot of us who are seniors this year, we didn’t have the chance to play as much last year due to rotation and the way minutes played out so a lot of us were wanting to compete,” said Lee.
Knowing the importance of athletes staying active and in preation for the future, athletic department leaders see the importance of being one of roughly half of the ILH schools to continue practices.
“If you don’t do anything for a whole year your skills will diminish, so we need to keep pushing those skills and making them a better player,” said Athletic Director Scott Wagner.
Hoping to improve skills, players continue to practice.
“I’m still working out and trying to get better so I can play at the next level,” said Madisyn Sagawa, senior basketball player.
Seniors like Sagawa said they are also lending a hand to the younger students.
“We can help the younger kids and the younger underclassmen, develop and help them ease their transition into the next level,” said Lee.
One the other hand, some athletes don’t want to practice if there’s no game.
“Some players only want to play games and I understand that but it’s great that these girls have the dedication to keep coming out,” said Kaiser.
Showing up for practice is junior basketball player, Kyle Zeng, who said he puts in the hard work but said it is hard to practice without a game.
“Knowing that there are no games that I really have to prepare for, you lose some kind of motivation to practice harder,” said Zeng.
As for the seniors, a way to honor them is wanted.
“I hope they [have something] like a shoutout or something….even if it’s just a small slideshow,” said Nakano.
Girls soccer team is also in the process of proposing an idea for the seniors, said Kaiser.
“We are actually trying to put on a proposal right now, to have some sort of recognition ceremony for these girls,” said Kaiser.
If anything Kaiser hopes to see the seniors at the next alumni game.
“We would love for them to come back for alumni games in the future and hopefully we can kind of acknowledge them a little more then,” said Kaiser.
The athletic department does hope to coordinate something to honor them.
“We’re doing our very best to still try and create as much of the traditions as we can, more information will be coming back soon,” said Wagner.
Whatever the circumstance, athletes and coaches are persevering during this time and looking at the brighter side to life.
“One of the best things we see is players who come out and every time they get a touch on the ball they’re getting better,” said Kaiser.