Swinging into the baseball season 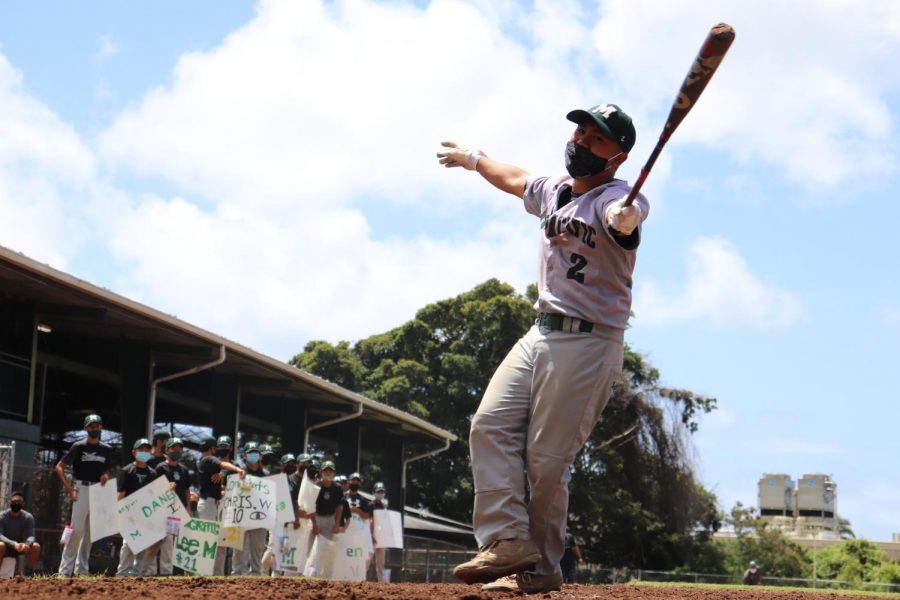 Mid-Pacific senior Bryson Ho enjoys the cheers from his fellow players. Mid-Pacific finished their baseball game on May 1 with an appreciation speech and cheers from the Junior Varsity players.

The crack of an aluminum bat connecting with a ball echoes throughout the void of a silent field without its fans.

The COVID-19 pandemic has had an effect on school sports this year, including a shortened season and strict safety rules.

“It’s awkward, I guess, because we can’t give high fives and we have to just say good job,” said senior baseball player Cayden Okada.

It has been hard on some players since they aren’t having their normal baseball experience.

“It’s just simple stuff like not being able to meet after games or innings,” said varsity junior player Jackson Keenan.

Not being able to hang out as much makes itdifficult for athletes to connect with each other.
“COVID has affected us because we are not able to enjoy each other’s presence as much and we can’t get our teammates hyped. It’s not as fun, but we still find ways to make it fun,” said junior varsity player Jerren Lum.

Players also can no longer congratulate each other which takes its toll on the players.

“It is very important, especially in baseball, because you are gonna fail a lot of the time and you always have to lift up your teammates or you’re gonna have a hard time winning games. You always need good support to pick people up especially if they’re struggling,” said Keenan.

They may not be able to have as much fun in the dugout, however players now find other ways to make the games fun like being more verbal and less physical.

Another benefit is athletes have more one on one time due to being in small cohorts, making it easier for coaches to point out their mistakes and improvements.

“Since we are in cohorts the coaches can work with so many players at a time,” said Okada.

However, sometimes practicing can’t beat luck. The varsity baseball team keeps a dinosaur around as their lucky charm, believing it brings them good luck.

“Baseball is very superstitious so if you have something and you keep winning you continue to use it,” said Keenan.

The regular baseball season was cut in half due to COVID, usually consisting of 14-15 games per season. This time around there are only seven games with four elimination games. Given that they usually have double the amount of games, it is a lot more important to win games.
According to current standings, varsity baseball holds a 5-2 win/loss record with a recent win against PAC-5. Junior Varsity is 3-2 coming off a recent loss against St. Louis.

“I think we have more success to come this season,” said Lum.

“The coaches are frustrated because Mid-Pacific practices all year long and they kind of have to start from scratch. And after a 6 month break and having to build up the team with shorter practices it is much harder for the coaches,” said Keenan.