Do we still need Pride? 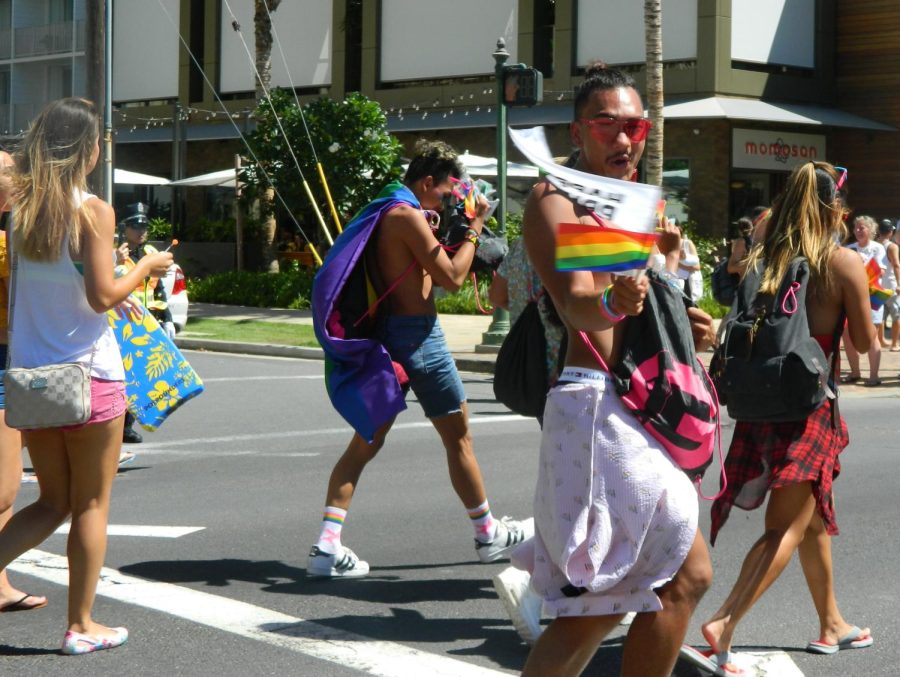 Person waves flags down the streets of Waikiki during Honolulu Pride 2018.

My first Pride was stuffy, loud, bright, and sweaty but most importantly, it was a place where people could convene and celebrate the queer community. Honolulu Pride in 2018 was an experience I won’t soon forget.

Lately, I’ve noticed that people believe pride should no longer be celebrated. This is due to how rights for gay people have progressed in the United States making people think there’s no “need” for pride anymore. Notable laws include the repeal of Don’t Ask Don’t Tell and the legalization of gay marriage in 2015. Whilst there is some merit to this argument, we should not forget about the wide spread homophobia/transphobia that still exists, the problems inside of the community itself and the other parts of the queer community that are still fighting for their rights.

“We aren’t always gathered in the way that pride brings us together. I think that’s an important time for us to discuss what we can do, discuss important issues, connect to people in the community that may not have the same privilege that we do, and just as a community reflect on the stuff that’s happening,” Hirschmann said.

Cris Pasquil is an advisor of Diversity-Equity-Inclusion (DEI), a group at Mid-Pacific dedicated to having open discussions with students and faculty about various issues involving race, gender and sexuality, socio-economic status, identity, ability, and more. It promotes advocating identity and knowing that there is a safe place.

“One of the reasons why we have pride celebrations is because of the history of discrimination and just terrible, terrible things that have happened in the past but still happen today,” Pasquil said.

In a place where so many people don’t feel seen or safe, how are we supposed to say the “fight is over?” The fight for queer struggles hasn’t stoped and homphobia did not end because same-sex marriage was legalized in 2015. A lot of members in the community face social and systemic issues, especially outside of the United States.

Tyrael Goo is a junior who puts an emphasis on the celebration of global pride.

“The more important thing is to continue pushing for people’s rights in those countries,” they said. “More important than celebrating yourself should be supporting each other.”

To say pride should end all together is not effective. We should be able to celebrate how far we’ve gone as a community while we think about where we can improve.

When you’re at pride, you’re surrounded by a community of people who are just like you. Pride can provide a safe place for people who don’t have anywhere else to be themselves.

“I was able to kind of find a community without openly saying ‘I was gay’ before I came out because no one is asking you, ‘What’s your sexuality?’ they’re just involving you and you don’t have to be clear, they just allow you into their space and their community,” Hirschmann said.

A person who feels like they need to fit themselves into a box in order to be considered normal because of their differences is a failure of the society that pushed those expectations onto them. That is not a person who you should yell at and hate but educate if possible.

“Am I gonna yell at someone for thinking the way they think? Do I yell at them or do I take the time to educate? And that’s why I’ve chosen to really emphasize educate because that’s an impactful way a culture can change,” Pasquil said.

If someone says something about Pride not needing to be celebrated anymore, you should try your best to educate them about the history of pride and discrimination in the queer community. But if you yourself are seeking that education, please remember it is not the job of the oppressed to educate the ignorant.

If you do not like Pride, then do not participate. It is as simple as that! Doesn’t matter if you’re in the community or not.

“If you don’t want to participate in pride, don’t. I’ve not really celebrated pride ever in my life. As a bi, ace, non binary person, I have been living perfectly fine,” Goo said.

Regardless of if you are a queer student reading this or not, the next time someone approaches you about pride, make sure you think about what the queer community as a whole has struggled through and how the community still struggles today. We still have work to do.