Should everyone announce their pronouns? 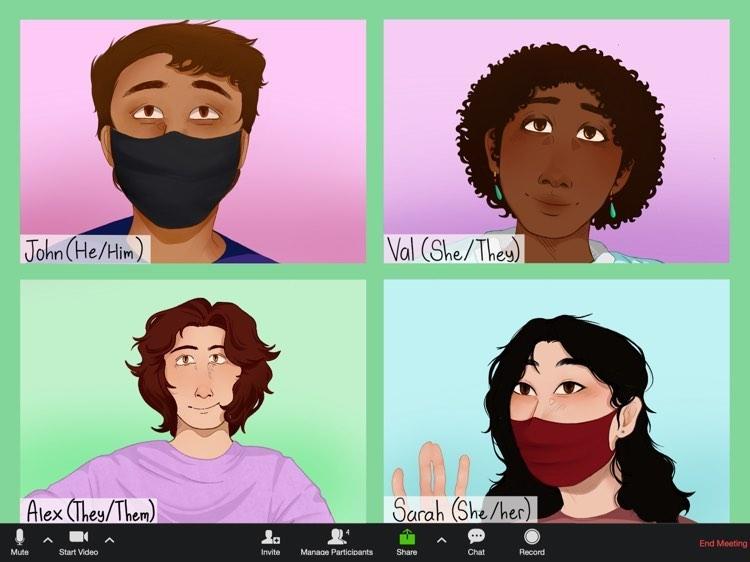 Using gender pronouns is easily done next to a name in Zoom. Illustration by Maya Copeland '24.

Logging onto Zoom in the past year, I was pleasantly surprised to see many teachers start to put their pronouns next to their usernames. This was the first time I saw teachers practice this inclusivity.

Just knowing that they’re willing to bring even the simplest pieces of inclusivity and representation into their classes is enough to make me smile, because not everyone is willing to do that. Announcing your pronouns and putting them next to your name in Zoom helps normalize that action for everyone.

There are people that have to disclose their pronouns often so they don’t risk getting misgendered by others. People who have never had to worry about this may not think it’s a big deal, but for those who have to deal with this on a daily basis, it can both alienate them and make them feel invalidated.

The more I see people announcing their pronouns, the more I wonder: should everyone announce them?

Diversity Equity Inclusion is a committee of students whose goal is to better educate our community on the issues revolving around what makes up our identity: gender identity, sexual orientation, race, religious beliefs and more.

Senior DEI committee member Jasper Ho explained one reason why there are so many people out there who wish everyone would announce their pronouns.

“It makes it a lot easier for people who don’t use binary pronouns,” said Ho.

As people discover who they are and learn more about the gender spectrum, the use of gender neutral and non-binary pronouns is becoming more widespread.

According to a survey by the Pew Research Center conducted in Fall 2018, six-in-ten Americans have heard of people preferring the use of gender neutral pronouns.

When people don’t announce pronouns, it can lead others to make assumptions based on the way a person presents themselves. This could lead them to incorrect conclusions. Gender isn’t defined by whether you dress in a masculine, feminine, or androgynous fashion. It’s about what you feel.

But this does not mean that all people should be forced to announce what they identify as. If it be for safety reasons, uncertainty, or they just don’t feel comfortable.

“There are definitely situations where they can be announced. But there are also some safety reasons where it’s probably not the best idea to share them,’’ said Ho.

But if you are able to announce your pronouns safely and comfortably, why not do it?

Some people say that pronouns are too confusing. Even Elon Musk, the famous founder of SpaceX and CEO of Tesla, said on Twitter “All these pronouns are an esthetic nightmare.”

Sophomore and DEI member, Sydney Woolley, has a reason for why many think pronouns are “too confusing.”

She’s right. If someone tells you what pronouns they use, then that’s that. There’s nothing else to it.

“If someone tells you their pronouns, just accept it and just use them,” said Woolley.

People overcomplicate it and make it out to be more than what it is.

“They’ll automatically assume it has something to do with the LGBT community even though it really doesn’t. Everyone has pronouns even if you’re not part of the community,” said Woolley.

We all have pronouns. Our only concern with others’ pronouns should be making sure we address them properly.

“I think people sort of just get confused when they think pronouns are just like a common courtesy. No, it’s a very specific part of this person’s identity,” said Ho.

Having discussions about pronouns is how you can learn more and open up to new ideas. It’s better to join the conversation and ask questions, than to avoid the topic altogether. Avoiding the topic can be harmful because you’re closing yourself off from learning about the identities of those around you.

People treating the topic of gender and pronouns as a joke is in no way unheard of.

“That’s because they don’t have the experience of being misgendered,” said Ho.

There’s a significant number of people that talk about how it’s “strange” that there are suddenly all these “new” genders. Only they’re not new, it’s just become more acceptable recently to identify as something other than strictly male or female.

Genders beyond male and female have been around for a long time. Take the word māhū for example, a Hawaiian term for people who carry both male and a female spirit/characteristics.

Before the colonization of Hawaii, māhū were very admired and seen as a third gender. But now, that term is sometimes used derogatorily when used to describe feminine men.

Social Studies teacher, Cris Pasquil, is the advisor for DEI. Pasquil added that society has long stigmatized individuals outside of conventional boundaries.

“All the genders that are now known today may have existed in the past, however it was the dominant culture and society that oppressed it and did not allow them to exist,” said Pasquil.

I think some people use the fact that they’ve only recently learned about non-binary genders as an excuse to mess up or ignore the existence all together. But just because you didn’t know about this doesn’t mean it’s okay to deny these people their identity.

It’s understandable that you may make a mistake or two, but it’s not okay to excuse it by saying “I never had to do this before so it doesn’t really matter now,” because it does matter. If you make a mistake, you can correct it. There’s no need to make a huge deal about it.

“We’re not asking for everyone to be all knowing but just being able to take the time to really learn who someone is,” said Pasquil.

Sometimes people find the topic of pronouns and gender difficult to discuss. I’ve seen some people act so awkward when the subject comes up, even when it’s just a general conversation that doesn’t refer to them at all. I’m not sure if it’s because it genuinely makes them uncomfortable or if they just don’t want to ‘get something wrong’.

“I think it’s a pretty easy subject to talk about but actually understanding it is a whole different story. I can only really talk about surface level knowledge,” said Lew.

It can be important to practice talking about it.

“If we want to belong to a community, an inclusive learning community, that accepts everybody, then we need to practice it,” said Pasquil.

He agreed that it should be up to the person whether or not they disclose their gender identity and pronouns. Some individuals could be in the process of figuring out who they are and may not be ready to share their identity.

“I would not want to force anything out because they may not be ready,” said Pasquil.

Asking someone about their pronouns can be a really nice and normal thing, as long as you do it in a comfortable way. For example, it would be better to ask them privately what pronouns they use, rather than ask in front of a big group of people, in case it’s a sensitive topic for them.

You can also start putting your pronouns next to your name in your emails or social media bio. This is a simple practice to help normalize disclosing pronouns.

It’s always going to be up to you whether or not you disclose your pronouns, but if you’re safe and comfortable with it, you should consider announcing them.

Transgender youth are more at risk for suicide ideation and attempts than cisgender youth. According to a 2019 study done by the CDC, 35 percent of transgender survey takers attempted suicide.

According to article by the American Academy of Pediatrics, transgender youth whose identities are supported do not have elevated depression levels.

This means that us supporting the gender identity of others in our community is a form of suicide prevention. A part of that support could be announcing your pronouns, asking others about their pronouns, and being open to discussion on gender identity.

So let’s get on that. The next time someone brings up pronouns if you’re welcoming and receptive then you’re doing your part to make our community more inclusive.

When asked about what more students and the school could be doing, Pasquil said everyone can start by using their pronouns when they introduce themselves, you can ask others which pronouns they prefer, and you can include your pronouns with your Zoom username.