Is TikTok a waste of time? 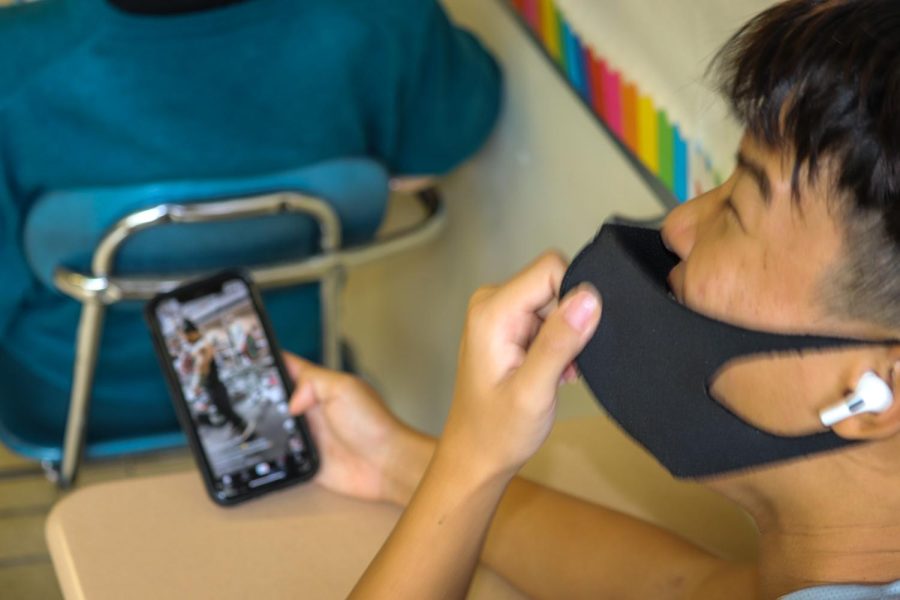 Junior, Taro Tsuji 23’, is laughing at his funny TikTok that he encountered during homeroom.

“3…2…1…” my classmate said as he started to dance. Listening to music, I watched my classmates share and make videos on the social media app Tik Tok. My classmates were supposed to be doing their work, but were instead on TikTok, wasting school time.

Recently, Tik Tok has become more integrated into society and people’s lives. Most Mid-Pacific high schoolers are aware of the social media platform and its impact on their daily routine. Many high schoolers use Tik Tok daily, with both helpful and harmful results.

Counselor Catherine Juliano is a counselor for MA Hawaii Center for Children said, “I think everyone across the board, our attention span has gone way down.”

Social media is extremely distracting, something our generation knows well since we grew up with it. Anyone can become hooked on social media because the company’s algorithm is designed to make you stay on the app. TikTok’s rapid growth is a problem. Students shouldn’t be spending hours every day on social media.

“I don’t think anybody really uses it in a way that’s healthy,” said Juliano.

According to the Child Mind Institute, social media can have a negative effect on people’s mental health. Cyberbullying, stalking, being ignored and other prevalent issues on social media can lead to depression, anxiety, poor body image, and loneliness.

“TikTok leads me into a loop of scrolling, and I can’t concentrate on my homework,” said senior Zane Cimble.

The “For You” page is a feature on the app that allows you to look at creators you may not follow yet. This is part of TikTok’s algorithm which is made to show you videos you’ll probably like based on previous interactions. This can keep users on the platform for longer than expected.

Cimble said he had to delete the app last year because his grades were dropping. After a week off Tik Tok, he started to catch up on his work because he wasn’t being distracted.

“I deleted the app last because I could not finish my school work,” said Cimble.

When Cimble told me he had to delete the app last year, I was surprised. I had never heard of someone deleting an app because it was too distracting. If TikTok can have this impact on students, it’s already a problem and can become a future problem for the next generation. Since the world is rapidly changing and technology is being more encrypted into our daily lives, the negative effects of social media will then grow the more it’s involved in our lives.

Kama Higa is a senior who thinks TikTok can get distracting but also helps him.

“I see other people make food, art and build ideas and some projects,” Higa said.

Watching TikTok can help students with new ideas and help them to collaborate and make new creative projects. Social media lets students showcase what they have been working on, either individually or as a group.

It’s a good thing that students express their work through social media. Students can learn new tricks, but I believe teens tend to want to watch trends and entertainment instead of these kinds of videos because they are more captivating.

Sophomore Micah Chong said, “I like to watch and recreate videos on TikTok and spend around 4 hours on it.”

TikTok can be a distraction for some students since social media is so captivating. Personally, I don’t really look at the TikTok For You Page, just when my friends post or send me a video. Nevertheless, students should be aware of their time usage on the platform.

It is inevitable for students to look at TikTok. Regardless, students should not be focused on social media all the time. We should try and stay off of TikTok during school because it can become too big a distraction.

“I believe that TikTok is not that important because it is way too big of a distraction.”