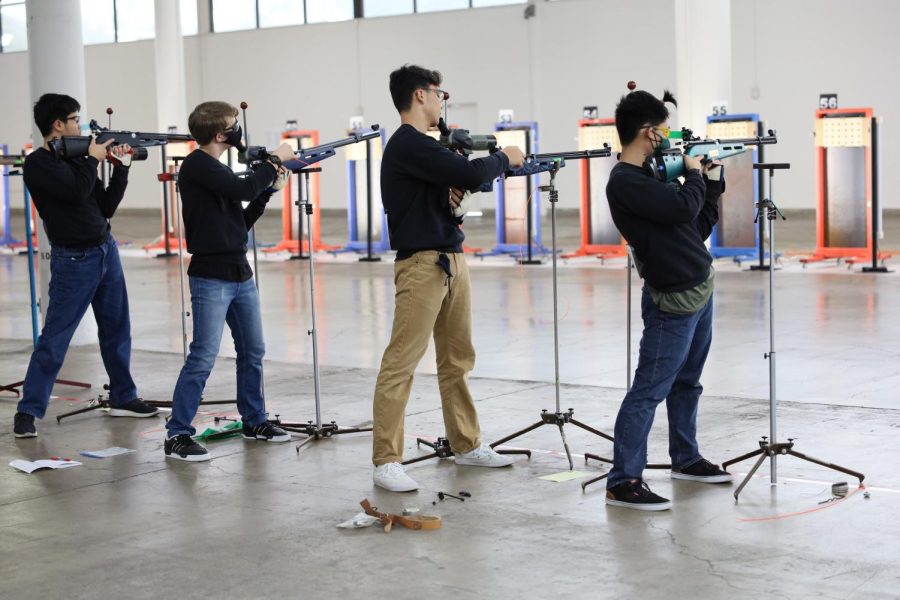 Nathan Loo, Ethan Harrison, Jordan Lampitelli, and Colby Fujino focus in their standing positions as they get ready to release the trigger on their rifles. The boy varsity air riflery team participated and won the Hawaii High School Athletic Association state championship.

“In order to be a good sporter athlete, one must be able to do repetitive motions and actions the exact same way hundreds of times during a match,” said Sporter Air Riflery coach Jon Narimatsu.

Sporter Air Riflery is a three-position air riflery sport consisting of shooting pellets with an air rifle into a set number of targets in the prone, standing and kneeling positions. It requires focus, patience, stamina, a positive attitude and being able to create an inner calm and balance.

“[It’s] the art of making positional and sight corrections to get the pellet to strike [the] bullseye as close to [the] center as possible. If they focus on their procedures and think like a team, air riflery athletes will then achieve the results they seek,” Narimatsu said.

Some athletes said that this season involved more than just the concept of the sport, but also a broader perspective on life itself.

“It taught me a lot of life lessons like responsibility, time management, being a leader and knowing how to lead a team,” said senior and girls varsity team captain Kylie Murakami.

Murakami came in first place for this ILH season overall and fifth place at the state championship match (scoring 514 out of 600 points), which made her proud to see herself overcome so many challenges, she said.

This season, both the boys and girls Varsity teams finished the season undefeated (5-0) and each team earned their ILH team titles.

Senior Nathan Loo said the feeling of being a champion is exhilarating because of the thought that all his hard work through endless practicing and determination has paid off in the end.

“It’s a good thought to know that you actually made it somewhere and that a lot of the work that you put into practice every day for one and a half to three hours is actually paying off,” said Loo.

Loo placed ninth out of 37 boys in the varsity division for the overall ILH season. At the state championship, he placed 25th overall (scoring 502 out of 600 points).

Due to COVID, special conditions applied to this season’s ILH matches. Specifically, these matches happened virtually where each team shot at their home field and scores were submitted online.

These conditions made Murakami feel less pressure that already came with performing well, and it enabled her to concentrate more.

“I didn’t have the nerves and the intimidation of seeing the other team shooting next to me…by not having them there next to me this season, it alleviated a lot of that stress, which helped me focus on the match,” said Murakami.

Sophomore Caleb DeSoto said he feels happy and proud of his team for being able to follow the air riflery winning streak.

“It’s pretty awesome to be a part of a continuing history of just being really good at riflery. It always feels nice to be able to live up to the expectations that have been set over the past years of winning,” said DeSoto.

DeSoto participated in the ILH individual championships, a separate match specially held to crown an individual champion, and got 20th (last) place. He is grateful for the opportunity to take part in the competition and for the fact that he placed

Due to the previous wins by the team, some athletes said they felt pressure to do equally good or even better than previous seasons.

Loo said the pressure was real and it only got more nerve wracking knowing that he’s a senior, somebody that people usually look to as role models.

“I’ve been in this for so long I got to see all of the preceding seniors come and go. Once they’re gone, everything falls into perspective that somewhere, something or someone needs to step up,” he said.

Placement in that same role he’s looked up to for years comes with its struggles, but he wouldn’t want it any other way, Loo said.

Narimatsu said he was motivated to coach as best as he could because of the athletes’ drive towards air riflery.

“The dedication of my athletes to their sport is the primary motivation for me to always give my best as their coach,” said Narimatsu.

This season, the wins of teams did not play a factor in determination towards pushing through the challenges, said Loo.

“It was all about our own individual improvement, how far we can take ourselves, and how we communicate to each other because it’s also a team sport,” he said.

In the midst of the season, Murakami said the team’s bond contributed to their success and connections with one another.

“We all got a lot closer as the season progressed. I think it caused us to enjoy practice a lot more and want to see each other and the team succeed,” she said.

DeSoto said having fun while also putting in the best amount of effort from within, which ultimately led to positive results for the teams this year.

“If you just show up to shoot and have a good time, the results will follow. This year, we showed up, we did our best and the results and the wins followed,” said DeSoto.